I was already at Ternate at past 5am. It was too cold.

I have had a Shawarma at Coastal Mall before taking the bus to Tanza.

I had my coffee at Jollibee Tanza before proceeding to Ternate.

Before 6am, I ate a Pork Asado and Rice before the sun rise.

By the time light comes, and people start coming, I am already sleepy. lol. 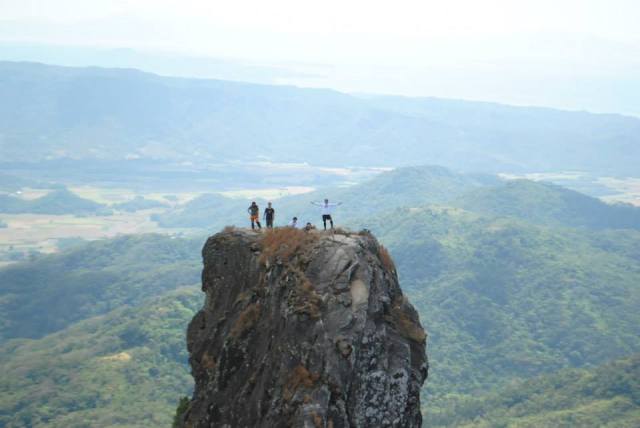 The group at the Monolith…me with arms spread out. 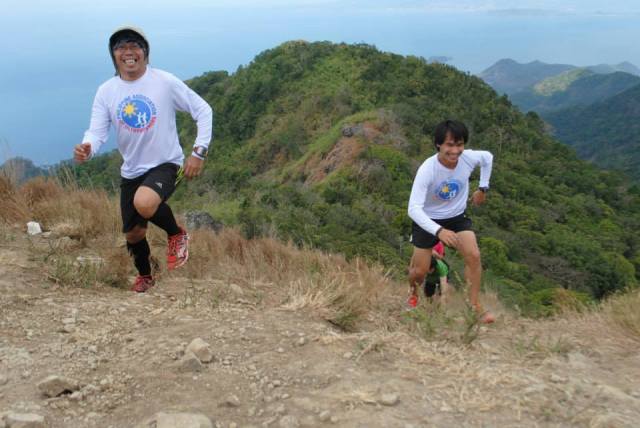 Racing to the Summit with Epoy. I won of course!…lol

Thanks for the Chicken Adobo! And the Tocino with Rice.

I ran out of water but I wont complain.

The heat is hot enough but not so hot.

Took me a lot of time going home…

Thanks to Epoy and his group for this hike. It’s one for the books!

Monday is Unaccounted For. I got busy, you know.

with PUMA Axis over Burlington Socks

with PUMA Axis over Burlington Socks

with PUMA Axis over Nike Socks

It is still a good ride!

with PUMA Axis over a generic black socks

Finished 55 kms at Naic to Nasugbu Ultramarathon in 9:02:47 (Official Result)

no RUN nor JOG nor WALK…

no RUN or JOG or WALK

SUNDAY, the 5th of January

If the Lord is willing…

***registered already and still in training.

Retired and Not allowed to Race anymore…:(

WEDNESDAY, the 25th of December

THURSDAY @ WORK, the 26th of December

FRIDAY @ WORK, the 27th of December

All thanks and praise be to God!

I will continue my personal challenge of 260 kms for the month at the fastest time possible,  then push the mileage to 400 – or something close to it. 🙂

Not until Friday morning was I able to get a ride going to Cavinti on Friday night. Thanks to Doc Minnie Tomas and Miko Sabado who gladly toook me in to their car. Praise be to God!

I waited for them at Guadalupe Bridge before 11pm. By past 1:00am, we are already in Cavinti Town Plaza – resting in the parked car. 🙂

The weather seemed nice. The temperature is so cold.

The race was scheduled to start at 4:30am. At about 4:10am, we heard an announcement that the 42K and 21K will start at the same time – 5:30am. Maybe because it rained? It did. To top it all, as the program continued for the Organizers, electricity in the town suddenly failed too. It’s too dark to start.

Anyways, the race did start at 5:30am. It was a silent start. Everybody seemed to be cold or something else.

As for me, I started with a brisk walk and slowly pushed the pace. My garmin is not working well. I wonder why. Signal is not good too. So I turned it off until KM 107 marker of the road in Lumot Lake.

I do know that I am running well and fast (for me).

As we enter the trail, I was surprised to find an all-mud trail (again) like the one we had when we test-run the route. But of course, it’s a different game now that I am wearing a trail shoe – my Roclite 243 by Innov-8.

I was a bit hesitant at first to dash-through the mud – but I have no choice. It is really an all-mud route.

With the REAL monsters (of Team Cavite ESE)! (i am way too below them!) 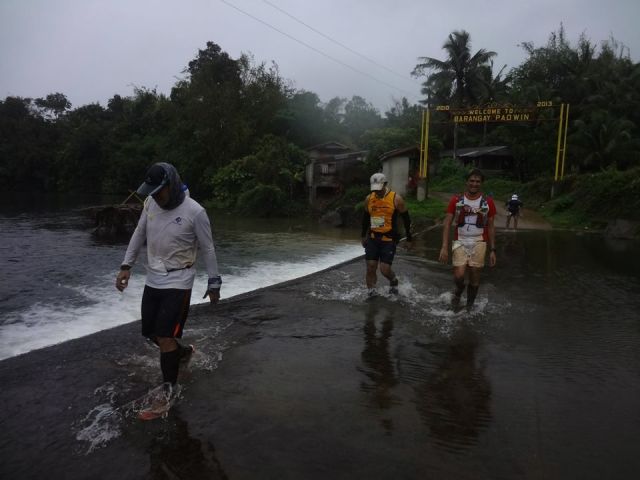 Photo by Arvin. @the SPILLWAY from the trail. Re-charged here with a hard-boiled egg and gatorade.

At this point of the race after the deep-muddy trail going to the road of Barangay Paowin, the spillway was a perfect spot for a good re-charge. I must mention though of the Delicious (make it 10x intense!) Giant Espasol. It was all I had and a hard-boiled egg for the entire race other than the drinks of Gatorade and Water refills. I carried nothing but my Simple Hydration (well placed at my nape) and a few sachets of Hydrite. I was running at a good easy pace. I can’t ask for more. I wanted to speed up but I like the way I am moving so far. No tired-feeling nor any pain anywhere.

I did catched-up with Benj at the deep-mud trail before Paowin. From there up to the Finish Line, we were just running side by side. We both finished at 6 hours and 9 minutes.

No more food left at the finish line. I did have 1 hard-boiled egg.

I changed clothes after cleaning myself at the Spill Way and in the Bath Room of the Resort. It took a bit of a lot of time to clean the shoes and the socks (soaked in clay mud). After, I stayed in the car while watching runners finish.

It was (for me) an easy run. Not because the route is easy but because I ran at my easy pace. The only part where I am at my tempo pace is at the road before entering the trail. The weather did changed from cold to very cold – so I moved a bit faster. The rain did stopped but the drizzle continued.

It was a fun run in the trail running with people I have no idea who. But we have had conversations – lots of rants and funny remarks along as we progressed. It was also a never ending GOOD morning as we started seeing the counter-flowing Monsters of Running on their way back while we are on our way to the u-turn of the route.

Even after about 2 hours after I crossed the finish line, the rain continued. Runners still came. Notable was one guy who was literally struggling with his left leg. He finished dragging that leg. I wonder for how long he endured.

There was also this vendor on bike – a pansit vendor. I took a bite of his generous offer of the pansit habhab. It’s good enough. Even the putong bigas is good. Maybe I am just hungry. Maybe it was really good. 🙂 I’m not sure anymore.

On our way back to Manila, we passed by Total gasoline station at SLEX where the Nike Factory is. But I decided to just buy a Cappuccino and a Banana-Choco Chip Loaf for a snack.

We had dinner, and some nice chat before going to bed.

It was overall a marathon worth trying. Without the mud, it will not be an adventure. Maybe, also, without the rain.

Thanks to the hardwork of Joseph Prince Baltazar. This was just a simple idea before. Now, it has come to be a reality!

All glory, honor, thanks and praise be to our Lord God, Almighty!

The elevation detail and the figure of the trail. It’s not really that hard for the prepared – and is a titan to others. 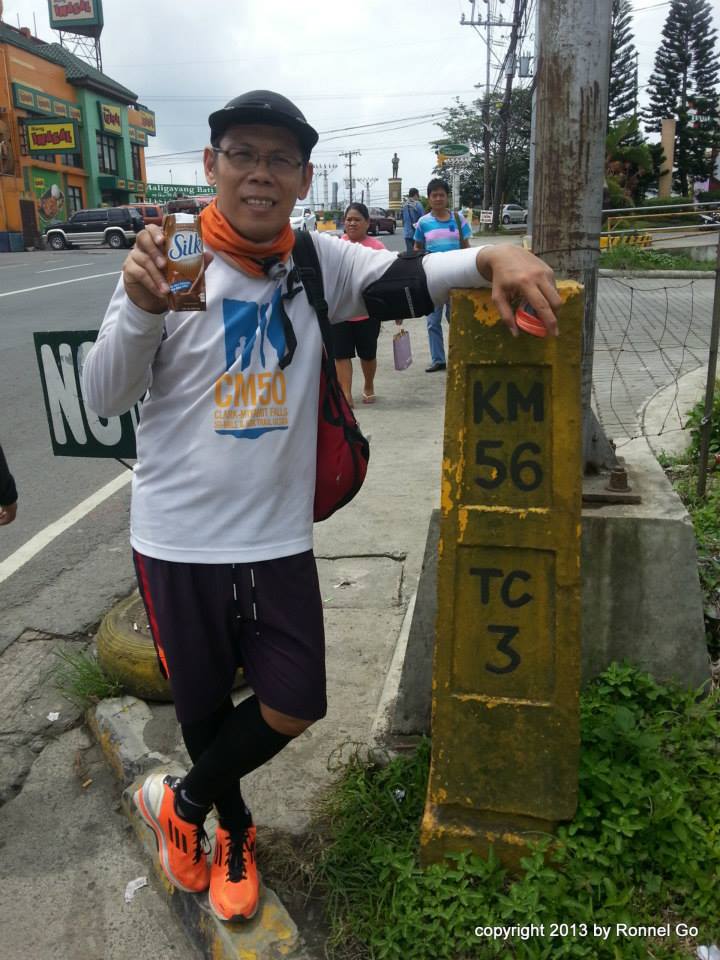 Donate
Make a donation to keep the Miles to Blog directory alive. Even $1.00 will help go to the cost of the domain name and host service. Thank you!

Energybits
Save 20% on all you need to run your best! More »

Blog Design
If you are interested in a blog renovation for under $100, please e-mail the webmaster.

A healthy lifestyle blog that brings you the best, most trusted resources created by real experts to help you achieve the best version of yourself

All about Health and Fitness

Musings and books from a grunty overthinker

My Journey in Life

A healthy lifestyle blog that brings you the best, most trusted resources created by real experts to help you achieve the best version of yourself

All about Health and Fitness

Musings and books from a grunty overthinker

My Journey in Life